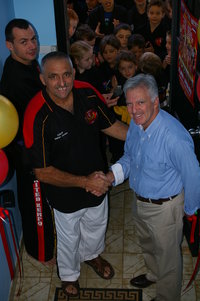 Sensei Jordan Micakovski was born in Capari (pronounced as sapari) in the Republic of Macedonia on the 22 of November 1952. He arrived in Australia in 1970 at the age of 17. Who has trained in many forms of martial arts such as Roman wrestling, Karate, Teak won do, Brazilian Jiu Jitsu, Koju ryu karate, Kosho ryu Kempo. Since arriving in Australia he has trained with one the founder of Karate in Australia Mr Merv Oakley Sensei Jordan trained with Mr Oakley for more than 5 years. And than went on to train in other Art forms. Sensei Jordan has a black belt in Teak won do and a 4th degree in Kempo Karate. And a high knowledge of many other forms of martial arts.

More recently he opened his own martial arts school and named it united Kempo. His first Martial arts school was at a local school named Rossmore public school witch first opened on 26/05/1997. In the short time his dojo has been opened no one could of ever dreamed of the success he and his schools have had with in 5 years he has produced over 50 State champions and over 30 world champions. To this day Sensei Jordan continues to train and produce some of the best fighters in Australia. With his recent success in the 2002 WOMAA world cup were he single headedly took 15 students from united Kempo martial arts academy over to Hawaii. And brought back over 55 medals and one grand championship and made a new record in Australian martial arts with the highest medal tally on an athlete to medal ratio.

Even more recent he has won a high honour of local Australian of the year from Liverpool council on Australia day 2004 for his contributions to the local community and martial arts.

3 Weeks Unlimited Classes for only $40